How To Avoid Sports Bars: BBQ Winglets and Shrimp

Twilight in February. I strike a match, and put flame to the political section, which resided nicely crumpled in the bottom of the charcoal chimney. The initial rush of smoke was strong, as it curled up into the fading light. A satisfied contentment was in the air as I tarried there at the pit, hands in my smoking jacket, admiring how the moon hung in the eastern sky, and how its soft ,blue hue washed over my many snow piles, shoveled high, and seasoned in ashes blown. A pleasant evening to grill, by and far. But then when isn’t it, really.  Lets head inside then, and see what’s for supper.

Deep in the recesses of the freezer, where men seldom tread, I found a bag of winglets which all but begged for attention. I was reminded of some popular sports bars in the area, where upon I would patron on occasion, who would specialize in these sort of wings. And they were pretty good wings as wings go, tho nothing remarkable, but a staple still you could count on in the heady thralls of meat lust. But I grow weary of those places, with their crowds of people and their sticky tables. And their overly loud ambiance,  of which you can nary hear anybody you’re talking to anyways. I guess I’m getting older. I aspire higher than that. Thus, but to create their choice appetizer from the quiet and tranquil quarters of my pit, kissed gently by a moon beam, well, that was more my style tonight. As most nights are I guess. 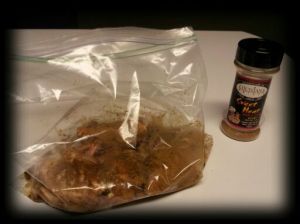 After the winglets had thawed, and being the creature of efficiency that I am, I just left them in the bag for the seasoning process. I dusted them with great abandoned with some Louisiana Grill Sweet Heat, and shook the bag around like the shake and bake commercials of old.  It felt good. Almost therapeutic  A lovely technique for getting that rub everywhere it ought to go. And by golly, I shook it good.  The rub was actually a bi-product of haste, go figure, as I mistakenly clicked on it, and the inter web minions thus sent it to my door step, for better or for worse. Turned out to be pretty tasty, however, and I think I might even order some more now. At any rate, the wings are ready, so let’s go put them on the grill. Let us put meat to flame! 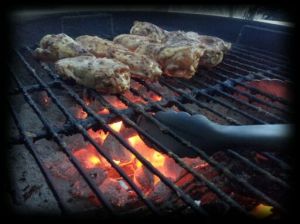 Over direct heat to start, nice and hot, like sending your soldiers to boot camp, to sear them up, and make them a little crunchy on the skin.  After boot camp, lets tuck these winglets aside over the all-important in-direct heat, a forgiving technique all aspiring grill masters seldom can go wrong with. Smoke wood optional, but if you have it, why not. I always seem to have scraps of hickory laying about, so that’s what I used. Also, in my freezer foray I happened upon some shrimp, or least-wise I think it was shrimp. Yeah, it was shrimp alright, of which I added to the cook at the last-minute, to broaden if you will, the meat diversity on my plate. Giving equal ingesting opportunity to the things of the sea, as well as what flirts in the farm yard.

Next step was to put the lid on and leave the thing alone for a while, to infuse some of that smokey flavor into the meat, that we all know and love. A wonderful process involving the procuring of yourself a lovely beverage from the ice box, and taking up residence in the nearest easy chair, whilst overseeing the grill puff away in fading light. Milky moonbeams on hickory smoke, ah, these are the simple pleasures patron to the cook. Why it is we do what we do, forsaking the stove top for the hobo lifestyle, under the shimmering stars, and over the open flame. Ambiance no crowded sports bar will ever match.

During the last 10 minutes or so, I basted the winglets in some Sweet Baby Rays, and hit them a little more with some direct heat, to caramelize the sugars a tad. Man! Then proceeded to plate up, and dine in the acute absence of the sports bar scene, whilst basking in the relative tranquility patron to the pit. Amen.

This entry was posted on February 26, 2013 by Patrons of the Pit. It was filed under Uncategorized and was tagged with barbeque, bbq, chicken, cooking, food, grilling, how to avoid, meat, moon beam, pit, shrimp, sports bar, sweet heat, winglets, wings.