Door County Cooking, The Least of my Worries

Our fellow patron host is on vacation this week. He has traveled much this year, and as usual, he has some things to report from the field. Like when he visited Arizona earlier this spring, and discovered the Dip Lady. Or when he was up in the wilds of northern Minnesota a few weeks back,  and won the great 2013 Burger Throw Down there, with his pine-apple topped  blue cheese jerk burger. This week he finds himself in Door County, Wisconsin, a lovely tendril of real estate patron to a mid-west sort of paradise. He’s loitering in a quaint country cottage there, and reports back to us his latest supper from the grill. The man is clearly on vacation.

There are times when your mind needs to slow down. When your body needs respite, and life just needs to take a little

break. A small cottage in the middle of Door County, Wisconsin, is just a place to do such things. Though the six-hour drive may seem long, pulling into the driveway there is the moment when the cares of this world seem to leave. When life, work, and responsibilities back in Minneapolis begin to disappear. Though I’m not going to write about my worries and cares, there are a few things I can honestly say allow me to let the worries of the world leave for a few hours. And that happens usually when I’m cooking, and mostly when I’m cooking for other people. Which was one of my few responsibilities while spending six quick days in Door County, Wisconsin.
Pork chops are this evening’s canvas for the variety of flavors I’m able to add to them. Mustard, cracked pepper, salt, and brown sugar to start, and finished the it all off with a medium baste of bbq sauce.

And of course I’ll perform with the indirect method. We want to be able to cut these chops with a fork. 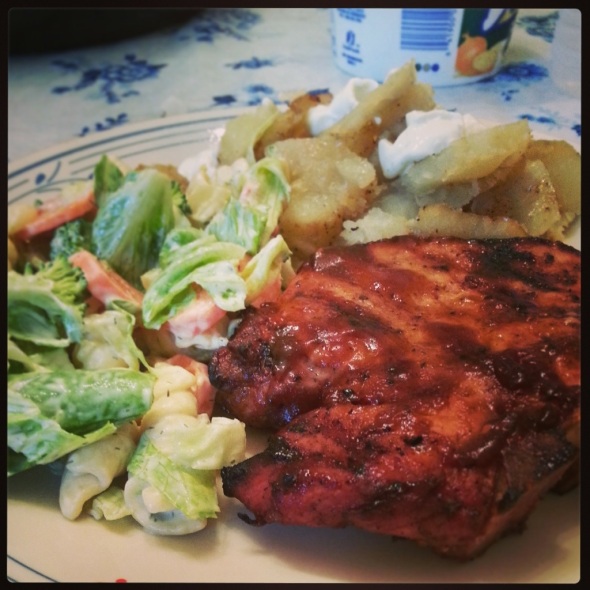 Ahh, this evening’s “chef-d’oeuvre”. A BBQ glazed pork chop with a fresh garden salad. Oven baked potatoes topped with sour cream and chives. I only heard a few choice words during dinner. Allot of  yums, mmmms, and a couple of wows. I walked away knowing the lack of communication was a compliment.

This entry was posted on June 13, 2013 by Patrons of the Pit. It was filed under Uncategorized and was tagged with barbecue, barbeque, bbq, bbq pork chop, cooking, food, meat, outdoor cooking, patrons of the pit, pit.