Ascending Everest: How To Smoke a Brisket Flat

Under gray, over-cast skies, and still in my pajamas, I sauntered out on to the patio this last Sunday morn, one, to

check on my banana peppers growing in the pit garden there, and secondly, to fire up the Weber Smokey Mountain. All the great epic smokes seem to start in my pajamas. OK, that didn’t quite come off right. What I mean is the bigger the meat, like a Boston butt, or in this case, a big brisket, generally means a considerably longer cook. One of marathon status, by and far. Ten hours or more are not uncommon. Thus, and if you’d actually like to have the meat for supper that day,  it also requires a rather early start. Reminiscent of what mountaineers refer to as an “alpine start“, when they arise at obscenely early hours for to assault the summit of snowy massifs like that of Mount Everest, before the weather degrades. Those guys are nuts. And we brethren of the smoke have our own Mount Everest. Often times hailed the most difficult, most ornery, and cantankerous cut of meat in our craft to tame. The beef brisket. 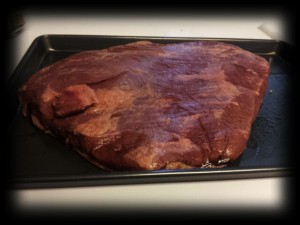 Now brisket comes from the front chest of the cow, and at it’s best is an unruly cut of meat, stubborn, yet highly favored by the skilled pit master. The thrill is in the journey, concerning brisket. Like mountaineers, we do it because “it’s there” I suppose. But if done right, it is also one of the most savory plunders in the smokey arts. Very satisfying, in both tummy and spirit. A true test of your pitmanship, or lack there of. And Texas pit masters have long made a living at it. They are to beef brisket what Sherpas are to Everest expeditions. Leastwise that is what they’d probably say in Texas. Those chaps love their brisket. The biggest piece of advice they might give us is that of patience. Briskets are their own beast for sure, an entity in meat, and not every one will be exactly like the other. But if your patient, and stoke your cooker full, and tweak it to 225 – 250 degrees F, well, that’s half the battle right there people. The remaining challenges dwell in the gauntlet of time.  Like most good things in life, you just gotta wait for it. And wait and wait. If you’re in hurry, smoking a brisket is not the thing for you. So whilst the smoker came up to temp and stabilized, I started my brisket journey by procuring myself a big bowl of Apple Jacks for breakfast. It was going to be a long day after all, and I didn’t much need the torment of being hungry whilst waiting on a brisket. You know how it is.

Anyways, placing my cereal aside, I smeared the flat over with mustard first, then patted it down with a good smattering of Sucklebusters Competition Rub. Many a newbie to the smokey arts believes the mustard slather is for flavoring the meat, but that is rank folly. In point of fact, we challenge any of you to actually taste the mustard whence the cook is done. You can’t. Nobody can. The reason we do it really, is so our rub has a good surface to stick to. A bonding agent, if you will. You can skip the mustard step altogether too if you wish, and your rub will stick good enough. But we were after a generous bark on this beast later on down the road, and the mustard kind of seems to help with that. Many a brisket purest however, forego the rub all together, and let the full flavor of the meat do the talking. Just salt and a little pepper. And that works too. What ever your pit master instincts are nudging you to do, comply, and  let it be well with the soul.

Once the cooker was up to 225 F and had stabilized with the sought-after thin, blue smoke, patron to smoldering hickory, we placed the flat on the upper grate, fat cap up. We did not trim any of the fat cap, as there wasn’t a whole lot to start with as it was. So we kept it all. Fat side up, naturally, for to harness the eternal powers of gravity married with the self-basting effect of rendering fat.  Next we inserted the Maverick probe into the thickest, beefiest quadrant of the beast, taking pain not to plunge it into any globs of fat, less its readings go amuck. And that’s it folks. Put the lid back on and let her smoke. If you got things to do, like put a new roof on the house or something, might as well head out and do i tnow. It would be better , however,in our humble opinion, to take up residence in your hammock, with a lovely beverage in hand, and tarry the day away there aside your bride’s feature petunia bed. But that’s just us. Regardless, dig in for the long haul. For the brisket train ain’t arriving till, well, when the cows come home this evening. And maybe not even then. Like many a pit keeper laments, “Its done when its done“. And this is never more so, nor better represented, than with the venerable brisket. 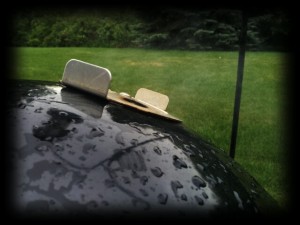 A cool rain developed, like a summer-time treat, falling from the gray skies, and dampening the earth below. Starting slow, drop by drop, and then ebbing into something resembling the weather old Noah must have seen as he reached for his caulking gun. The tweety birds carried on despite, tweeting, and so did I. Rain jacket on, hood flipped up. I like the rain, especially when I’m BBQing.  I like the mixed aromas of wet earth and wafting hickory. I like the sound of rain drops splatting over the hot, enameled lid of the smoker. I like the feeling of carrying on when most have dashed for cover. With a quality pit, you might be surprised at the degree of  inclement you and your betrothed spoils can weather, nay, can thrive in, whilst the skies fall, and the tempests conspire about thee. A pit keeper is seldom keen to hang up his tongs you see, just for a mere storm cloud overhead. For there is meat to be cooked, and glory to be had, patron to the fellowship of the coals.

At 170 internal, the meat stalled. Like grid lock on a Los Angeles free way. A common phenomenon in smoking the big meats, where you start to think your thermometer isn’t working any more. But it is. The only way out of it, is to grab another beverage, and hit up your favorite easy chair. Sometimes it takes one, or maybe even two naps, for the internal temperatures to start rising again. A vicious game this brisket smoking. But you can do it!

Anyways, after about 8 hours, several of which bathed in hickory and maple smoke, the flat reached 195 internal. Most

briskets start to get tender around this temperature. But not ours. It was still being ornery. Now we could have wrapped it in foil around the stall point, like many folks do, and that might have loosened things up a bit, but we were feeling rather lucky today, I guess. We felt like taking the long way around, you might say. The probe still pushed in firmly when I tested other spots, and if it were ideal, the probe would slide into the meat with strikingly little resistance.  Most briskets reach optimal tenderness within the 195 – 205 range. This small window is where you have to keep an eye on your beloved meat, less it sidle off for the dark side of BBQ.  Now is the time you don’t want to blow it, when you’re this close to the summit. Pull it off too soon, and you’ll have your self a nice, chewy, strap of boot leather. Over cook it, and it’s a dried out strap of boot leather. Yes, it’s a fickle beast. But one you can aptly tame with a liberal and abiding onslaught of patience.

At 225 – 250 degrees, you’re looking at probably 1 1/2 hours per pound. Whoa be it however, to the pit keeper who thinks he can cook a brisket by time alone.  Nor can we rely solely on internal temperature either, as we learned with this brisket. The best test really, when you think you’re getting close, as with most BBQ , is to slice off a hunk and actually taste it. Think of it as an exercise in quality control. Your pit master privilege. A good brisket is a triumph in tenderness, wrought from seeds of patience. Victory from an unlikely beast. When our brisket hit 205 internal, it was finally tender to the probe, like a knife through a soft stick of butter, and, might I add, tasted undeniably exquisite. Satisfied with what had procured here, I thus foiled the flat and brought it inside to rest.

Resting your meat is the oft over-looked procedure of back yard BBQ. The summit is sight. By golly, you swear you’re standing on it even, with your flag in your hand. We hear you, brethren. We are giddy and hungry, and want nothing more than to tear into our plunder with a reckless abandoned. Especially after waiting the entire day long for to taste it. But old man patience has one last step to teach us. When we rest the meat, it loosens the muscle fibers up a bit. And the juices, which were once scattered from the considerable rigors of cooking flesh,  redistribute now, back from whence they came, and thus flatters your end game and plate appearance with a much more savory, and juicy affair. A moist and smokey perfection. It is then, and only then, amid the lingering aroma of hickory, that the summit is officially yours. And you have earned it indeed. Amen. 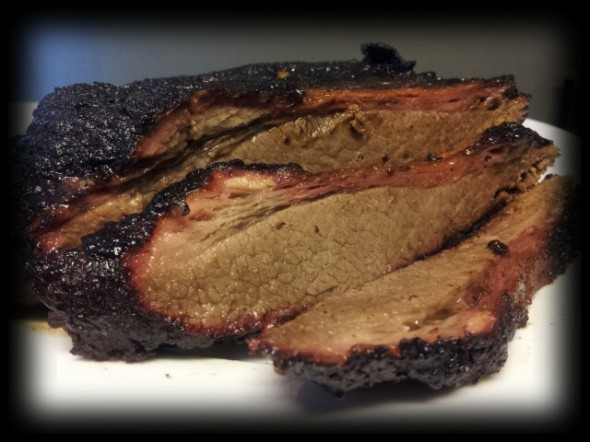 Eat it straight up, or chopped-up in a sandwich with a dob of cool coleslaw. Dang! There may be better things to eat out there…No, on second thought, I take that back. This is it!