Won’t You Be My Neighbor: Apple Smoked Pork Ribs

I always admired a man who would hang up his jacket only to put on a sweater. Then take off his shoes, just put on some more shoes. Then when he was done with those things, go play with some puppets. I guess we all have our own ilks in this world. Things that draw us a step closer to where we want to be. We’ll be the first to admit, when we were wee lads knee-high to a fire hydrant, my fellow patron and I frequented Mr Roger’s Neighborhood. And it was good. With a grilled cheese sandwich and some chocolate milk, we found solace there, amid the chaotic years of pre-school. We found a friend in the properly kept man in the sweater. One our mothers would finally approve of. And when he ushered us into the Land Of Make Believe, we were at once putty in his formative hands.  Oh yes, we had a good thing going with Mr Rogers. So did millions of other kids. And then some how, patron to the years, we turned into meat geeks. Which is odd because Mr. Rogers was also a practicing vegetarian. 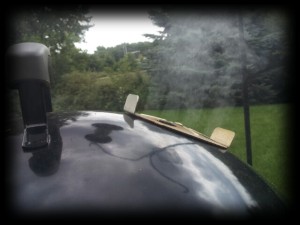 What we learned most from the man may have been his catchy slogan – “Won’t you be my neighbor“. A wonderful gesture of good will towards man, and all that sort of thing. And so it was and came to mind, when an old friend moved into our neighborhood recently, that possible good will towards a man seemed the appropriate thing to do. And so the night before, I pulled out two racks of ribs from the freezer depths to thaw. Because to a man, and maybe even some women too, what says welcome to the neighborhood better, or with more sincerity,  than a rack of perfectly executed pork ribs. 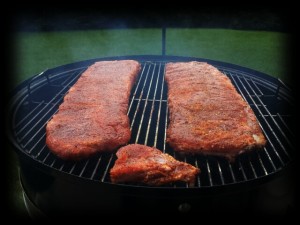 The next day, amid the afternoon sunbeams which dropped through the Spruce, I put two well-seasoned racks into the smoker. One dusted over with a pit favorite,  Suckle Busters Competition Rub, and the other in Famous Dave’s Rib Rub, a spice blend concocted by the local BBQ legend , Dave Anderson, who off-hand and by-the-way, really is famous.  Both racks were trimmed some, of extraneous junk, and the membrane on the back of the rack was removed. Why remove the membrane you ask? Well the answer is two-fold. The membrane is not unlike a sheet of plastic almost, in that it inhibits any penetration by seasoning or smoke – the two things we fancy most for our ribs.  Secondly, it’s kind of like chewing on a latex glove. Mr. Rogers would not approve. So you will do well to remove said membrane, or at the very least, slice it all up with a series of well-meaning cross-hatches via a sharp knife.

Now the first stage in smoking good ribs lasts about 3 hours. A perfect time to sit back in your patio easy chair, and watch some smoke curl. And by golly, you deserve it. What a privilege it is to let up on the accelerator pedal of life for a bit, and tarry in the good ambiance patron to the pit. Lovely beverage in hand, perhaps some tunes on the pit radio, hark, you will want for nothing else. I loitered for a good while aside the pit, reclaiming the joys there, and the fellowship of the coals. Thin tendrils of apple wood smoke curling from the damper, as if they had nothing else in the world to do. And the chickadees bantered it up in the thick of the Alders, like a gaggle of old men at the barber shop.

After about three hours, of 250 degrees, and bathed in continuous apple wood smoke, the next step is to foil them for a bit. I foiled these racks with a splattering of apple juice each, as a steaming agent for the next hour and half. Foiling your ribs like this is like sending your meat to the health spa, where they will be pampered like no pig ever dreamed. The tough continuity of the collagen is at last loosened up a trifle, and a tender, more gentler world is revealed.  The kind of  world you can really sink your teeth into, shall we say. Which is precisely what we did after that hour and half in the foil.  The ribs were carefully placed back on the grate, clear of the foil, for the benefit of cameras. My friend, who shall remain nameless,  Dan, showed up around then too, keen to the heady aromas of BBQ. We both sported grins as wide as a Montana gulch, as I pointed to the smokey plunder which resided there on the grate. No sauces necessary.

Dan may have wept. 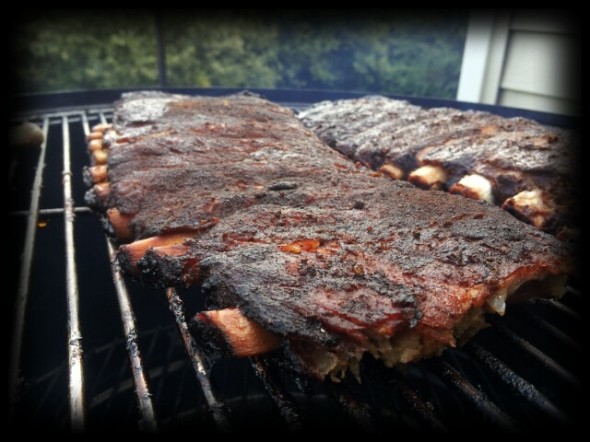 Slow-Apple-Smoked Pork Ribs. Man! Nothing says welcome to the neighborhood like a rack or two of perfectly smoked BBQ. Or, I suppose, a well-kept man in a blue sweater who plays with puppets.

This entry was posted on August 20, 2013 by Patrons of the Pit. It was filed under Uncategorized and was tagged with apple wood, barbecue, barbeque, bbq, cooking, food, foodie, grilling, Mr rogers, pork ribs, ribs, weber smokey mountain, wont you be my neighbor, writing.