Whilst the charcoal chimney came up to speed, with soft belches of white, aromatic smoke,  I leaned back in my BBQ chair, settling in for a wee bit of

grilling in the evening sun. There was leisure in the air, as often becomes the pit. Tweety birds on high, cavorting amid the Cottonwood leaves.  Geese milling about on a weedy pond. And I especially liked seeing the produce growing in the pit-side garden. It made me feel good, like food growing on your patio ought to I guess. I took a sip of my lovely beverage, set it carefully to rest, and grabbed the hose laying at my side, and promptly doused my beloved banana peppers and cucumbers and squash and beans. Sending a cool, yet artificial rain, glistening in the evening sun, down upon them.

Long about then two ducks, of the Mallard variety, wobbled up through the steely grass to make my acquaintanceship. Two handsome little dudes, who I must say,  looked rather at home around my pit. Probably because it was their home, well a few yards away it was I suppose. And while I admired their ability to strut about so confidently like that, as if they owned the place, I may have succumbed to my innate tendencies of being a man, and did what any red-blooded man would do when confronted by a couple, cute little ducks. I shot them with my garden hose.  Ah yes, I hosed them down liberally, to which their counter was not entirely a surprise. They straightened up tall, the both of them, spreading out their wings as if to bathe, nay to glory, in this wondrous, cool, liquid delight raining down upon them, whilst snapping their bills into thin air, in hopes, it appeared, of slurping up any wayward drops of water before they hit the grass, and disappeared there. What did I expect. They’re ducks! And I admired them even more. 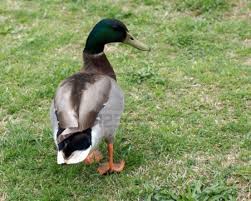 Anyways, on the grill tonight, a very simple affair. No, it’s not duck. But a few red potatoes, some chicken leg quarters, and some green beans, plucked fresh from the garden’s bounty. So grab yourself a cold beverage, and let me tell you more about it, all waterfowl aside.

Potatoes went on first. Spuds are a wonderful thing to grill. And there is a cornucopia of ways to do it. Tonight we did it about as simple as you can get. Two red potatoes simply halved, and there upon rubbed in olive oil, and seasoned in Lipton onion soup mix. That’s it. Then placed over direct heat to do their thing. Flipping occasionally through-out the cook for to soften both sides in equal fashion. Whilst the potatoes waged onward, next we plunked a couple of chicken leg quarters down in-direct, seasoned liberally in famous Dave’s Rib Rub. It says on the bottle to use it on everything, so we did. Now because we don’t so much fancy a smokey-flavored potato at the end of the day, no smoke wood was added here. The subtle, smokey flavors imparted by the charcoal are well enough for our ilk.  Lid on – all that’s left to do now is sidle back into your BBQ chair, muckle onto your pit beverage of choice, and hence engage in the waning hours of another day at the pit. Moments privy to poetry, lest we’re too far gone to notice them. But this is half the reason we cook outside in the first place, to re-acquaint with the splendor there. And to revel in it.

Like the way the evening sunbeams melt like gold through the fragrant Spruce. And how the rolling clouds kick their shadows along the ground, and how the hot-blooded creatures below rally for them. The Great Blue Heron beneath the willow yonder, how he stalks the shallows there with no less patience than a pit master mid-way through a twelve-hour brisket. And the banana peppers at your left, residing on bended stems, oh how they ripen before thine eyes as if they had nothing else in the world to do, and to this end,  to do it for just you.

Near the end of the cook, gussy up the chicken with some of your favorite BBQ sauce, and put a handful of those fresh green beans directly on the grill, perpendicular to the grate of course, lest we lose some of these green tendrils of goodness to the fiery depths below. That would suck. And the potatoes, if you’ve done them right, will be fluffy on the inside, and a tad crispy on the outside. Just like most of us.

BBQ chicken, grilled red potatoes, and grilled green beans. Yum about sums it up!  Just another day at the pit.  Hosing of resident ducks optional. Amen.

This entry was posted on August 29, 2013 by Patrons of the Pit. It was filed under Uncategorized and was tagged with barbecue, barbeque, bbq, cooking, food, foodie, grilling, poetry, writing.