In the Waning Light: When Steak and Potatoes Are More Than Enough

Such is light’s brief serenade for the sun which has dipped below the roof tops now, at an hour profoundly prior from which the supper bell tolls. The cool wind rustles up the neighborhood streets and across the backyards freshly mulched and pampered and smelling of a sleepy earth. The old pond dapples in the moonlight as the mallards and stately drakes cavort in it’s still, liquid waters. All the leaves have all fallen now, once resplendent and grand, and the geese are in constant formation it seems, bugging out for the promised land, of…well, I don’t know where the geese go actually. Probably to you guys down in Florida, I suppose. Texas too.

It’s November in Minnesota. Outdoor life is shutting down. Most folk have wheeled their BBQ’s inside for the winter now. We Patrons of the Pit, however, and Comrades of the Coals, well, we stoically march onward still, trimming our collars to the tempest of night, and manning our pits in stalwart fashion, for to bandy some rather keen moments still, in the waning, pale moon light.

On the pit tonight, probably the first head chiseled on to my personal Mount Rushmore of Things You Can Grill…Steak! A nice big one for me, and a slightly smaller one for the little lady. It always amazes me, as the resident grill jockey that I am, from all the umpteen dozens if not hundreds of recipes I’ve tried over the years, my favorite things to grill still are usually of the most simpleton in kind. For example, I enjoy a good steak, like this, lightly seasoned in just garlic and onion salt, as much as I enjoy, say, an elaborate, 12-hour, pecan smoked brisket flat, or even a rack of spare ribs perfectly executed to the nearest square inch. These things are quite lovely, and they are satisfying to do. But there’s also just something pleasantly perfect about a simple fare of meat and potatoes. About steak on the grill. And more over, there is a magic in grilling it there, amid a November night.

I flipped the steaks, tongs in hand, and listened to them sizzle on the hot cast iron grate. Orange flames licked up from below, searing the beef, as I pulled my patio chair up aside the old kettle grill. I sat there with the lid off watching the steaks cook, and enjoying the flicker of the flame and the radiant heat bellowing out of the Weber’s steely bosom.  It felt warm on my face, as I looked up and noted how the moonbeams dropped like angel kisses through the pit-side spruce trees. This was nice, I thought. Much better than most people think when they think of November grilling. I was not cold. Nor did the darkness matter. In point of fact, the darkness just seem to make the fire all the better. Something poignant and lovely to bandy by. And so by fire and by moonlight I sailed the culinary seas there, however briefly to the shores of edible succulence from whence I’ve longed. It didn’t take much effort either. Steaks are like that. And I already had the potatoes done in the kitchen, so… I plated up the spoils, turned heel as any man would, and sidled inside for the night.

After sliding the patio door shut, and locking it, I took another glance out at the grill, like pit keepers do. There it sat in the dark, quietly puffing away as if it didn’t have a care in the world. No, it didn’t mind doing its duty in November. In fact, it was just doing what it was born to do. And for a while at least, come to think of it, so was I. Amen.

Meat and potatoes. Some days I tell you, people, it’s all you need. Well, and a piece of coconut cream pie for dessert wouldn’t hurt none either. 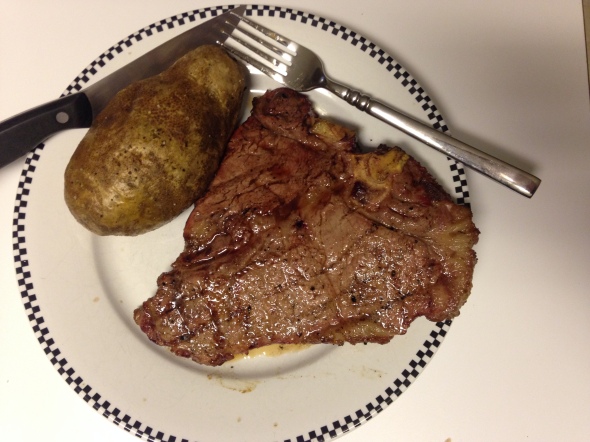 This entry was posted on November 11, 2016 by Patrons of the Pit. It was filed under Uncategorized and was tagged with autumn, bbq, cooking, food, foodie, grilling, outdoors, steak.