How to BBQ in a Polar Vortex 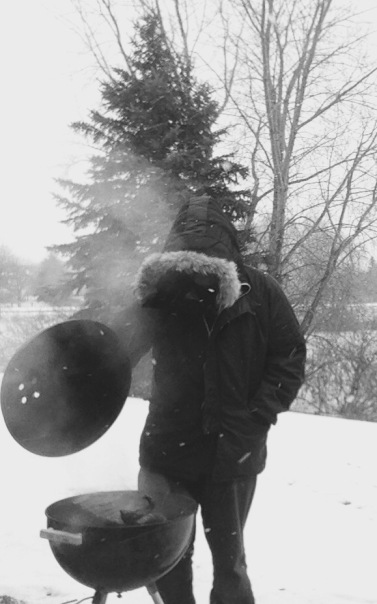 I thought I was a humble fellow, but I guess it turns out I’m not. It was just your run of the mill slab of pork ribs. Your basic kettle cook at 20 below. Truly, I thought nothing of it when my wife requested ribs for supper during a polar vortex. This is just what I do. Its who I am. And she knew it. However, in retrospect, I probably should have gone to McDonald’s for a Big Mac instead. Let me digress.

Indeed, the recent polar vortex to come through town put the kibosh on a great many outdoor activities. What with 20 below wind chills, it was a day obviously better suited for other endeavors besides the art of BBQ. But I had never gone sally with the elements before, leastwise where BBQ is concerned, and by golly, today wasn’t the day I would start. And the winds hurtled through the icy township with a divine authority that demanded respect. The good people of the world were huddled indoors, suckling hot cocoas and watching Netflix marathons. And then there was me. Fortunately, the Pond Side Pit was tucked into the gracious eddies of the house that which broke the keen and penetrating December wind. Well, for the most part it did. And there, amid my armory of Webers, I was able to make my stand.

I chose the Weber kettle as my tool of choice this smoke, for a couple of reasons. One, it’s small, and would require less fuel on this cold day to keep it hot. And two, I just didn’t feel like dumping ten pounds of charcoal into the Weber Smokey Mountain for one rack of ribs. As much as I love the WSM, it is rather the gas guzzling SUV of the meat smoking world. No matter, I was a Patron of the Pit. I had smoked ribs in the Weber kettle many times. This was old hat! Child’s play…

“Henceforth, I destroyed thy pork ribs with a vigor usually reserved for a nuclear detonation.”

They were hard, brittle, and crusty to the touch. Looked like the skeletal remains of a pet which did not make it clear of the house fire. It was bad. A chunk in hand could have maybe sufficed as a good charcoal pencil for the cave walls, that which I felt like I have just emerged from.  Hark, it looked as if my elder brother had even come by and assisted me with my BBQ whilst I was not looking. Where did I go wrong?

Well, for starters, I learned not to under-estimate the narcoleptic value of a good grandma blanket. Because that’s where I was for much of the smoke. Under a grandma in the living room, snoring like a brown bear whilst listening to football on the TV. It was an agreeable lifestyle. The kettle grill was left to its own devices out on the patio. I thought I had set it up for success. Turns out I had not. I had built the fires too hot inside it’s steely bosom. In an ill-guided miscalculation on my part, I figured somewhat logically, that because it was so cold out, I would counter the elements with a slightly larger fire. All this did however, was raise the pit temperature from pretty hot, to split-your-own-atoms, kind of hot. And thus incinerated my beloved ribs with all due effectiveness. Aw well. Live and learn, as they say.  There’s always tuna fish sandwiches for supper.

A week has passed. Maybe a bit more than that. The new weekend was upon thee, and I had a span of clock available to smoke another rack of ribs if I wanted. Well, with my last efforts still dawdling on my mind like cigar smoke in the drapes, I wanted nothing more than to rectify my blunder, and set my status right again in the smokey community. To get this rancid flavor of defeat off my tongue. The temperature had risen now to a balmy zero degrees or something like that. The wind was low, in-effectively low, and the tweety birds were even active again, darting about the yellow block of suet I had set out for them. This is as good as it was going to get in a Minnesota winter. Like an aplinist siezing a window of proper weather in which to summit Everest, I knew I must act soon. And I knew this time I would do it right, and fire up the Weber Smokey Mountain.

Doing it right with the Minion Method

Tho it uses moocho much fuel, one thing is for sure about the Weber Smokey Mountain. It works. And it works in the cold too. One heaping chimney full of orange glowing coals dumped into the center of a ring of unlit coals, as seen in the photo, is all  it takes for a rack or three of ribs on any given day. The minion method is your friend here. That’s where the lit coals slowly light up the unlit coals, and those coals in turn light up other unlit coals, kind of like a chain re-action, thus employing a steady, even burn, to last many hours with out baby sitting. The WSM was soon established at 225 degrees, and it did not budge from this temperature the rest of the cook. I should have just done it right the first time, but you know how it goes.

To learn more about the minion method, we did a write-up years ago on that. It’s probably our most read article. Consume at your leisure is so inclined.

Meanwhile, we seasoned up the ribs with a splattering of Worcestershire sauce, and then liberally dusted it Kit’s K.C. BBQ rub from our friends over at Miner’s Mix. We’ve said it before, but we’ll say it again; if we had to be monogomous to one spice rub company, I do believe the Miners Mix crew would be our choice. Just love their flavors. Here’s a link to their stuff if you guys haven’t yet had the occasion.

Anyways, we put the ribs on the pit, bone-side down, and let them do their thing for two and a half hours at 225 degrees in a gentle cloud of pecan smoke. Then we foiled them with a little smearing of butter and BBQ sauce for one more hour. And I napped only cautiously this time, under my grandma blanket, hockey game on the TV, and listened to the calling of my pit master instincts, as the culinary end game drew nearer to thee. And like it does in winter, the night fell early over the land, as the old bullet smoker puffed stoically out on the patio.  The aromas of a Carolina BBQ shack wafted over the crusty fields of blue-tinted snow, for which a slender moon hung silently above. I slipped into my shoes, and waddled out the patio door to check the tenderness of my spoils, jacket zipped tight, and there under the scant starlight of a cold winter’s eve, amid the sounds of sizzling pork and aluminum foil unwrapping, I knew as surely I had known anything before, that these ribs would at once be amazing. And furthermore, that I had been quitely redeemed. Amen. 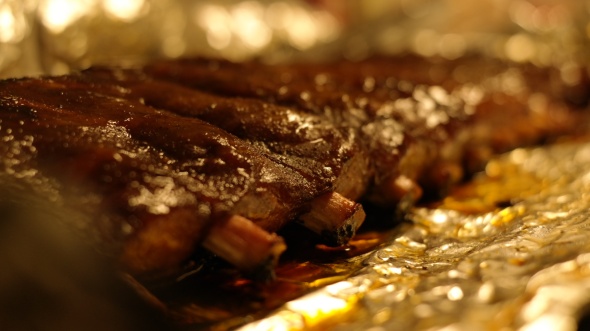 Succulent pecan-smoked pork ribs redeemed from the jaws of a polar vortex. Very satisfying, both to the stomach and soul. Grill on! -PotP

This entry was posted on January 3, 2017 by Patrons of the Pit. It was filed under Cooking, Uncategorized and was tagged with bbq, camping, cooking, food, foodie, humor, hunting, poetry, pork ribs, sports.