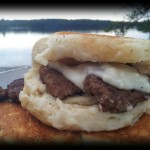 A hard rain drummed over the tent fly, and the tempest howled through the pines. Rain, and a good amount of it, beat over the land in a 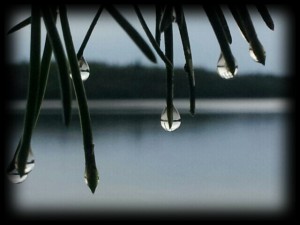 relentless onslaught, like pitch forks and hammer handles, and then, after reconsidering, up and went side-ways for a while, courtesy of the gales. My camping crony and I were held up in the tent, as if we had anyplace else to cower at such times, trapped deep in the wilderness. The lightning cracked through the heavens, and exploded like warheads all around us. And the thunder rattled the very earth upon which we hunkered. It was getting a little sporty out there.   Just another day camping in Minnesota’s Canoe Country. It wasn’t always like this though. Why, in point of fact, just a few minutes ago, we were enjoying a rather lovely supper over a crackling, jack pine, fire. It was pretty good too, by camp fire standards. So grab yourself a manly beverage, get comfy, and let me tell you about it.

It started as a simple respite, fire-side, frying up a pound of Jimmy Deans Italian Sausage. You can do it in a frying pan, or even wrap it in foil, and place it in the coals to cook. Whilst the sausage was arriving on the gastronomic front, we started up the biscuits over the campfire. It’s real easy to do too. As any camp fire gourmet knows, you do not need an oven to bake a biscuit. For reasons of simplicity, and patron to the lazy-camping arts, we procured one of them cans of biscuit dough from town. You know the kind. The kind that you peel open a bit, waiting for it to suddenly pop into submission. And we packed the frying pan full of them, and put it over direct heat.  Mean while on the camp stove, we set on two cups of water to boil. I looked up from the fire pit, and the lake reached like glass for the furthest shores. A pair of loons floated serenely out there, and wailed a lonesome, eerie song, which echoed through the forest prime evil, not to mention the very chambers of our souls. This was living. This day, this camp fire, this lake in the woods – pristine, and untouched by the wages of man. Glory!

Time to flip the biscuits. All of which were done with a flip of the wrist, like a fine French chef, sending all six biscuits up into the air simultaneously, rotating in amber shafts of sunlight, and remarkably all landing as they ought to, back in the frying pan. My eye brow raised. I was expecting one or two maybe to exile for the ground, and roll happy-go-lucky through the forest duff, and topple on down into the lake, but every once in a while, we are mistaken for food ninjas. And we keep our mouths shut when we are, and nonchalance is at once or closest ally.

Sunbeams suddenly faded, like the turn of a dimmer switch on the dining room wall. Like the man upstairs was standing at the light board of life, pulling the sliders down, and raising some others, queuing the thickening clouds. A wisp of wind curled through the campfire. Thunder bellowed in the West. The water on the camp stove was boiling now. Time to add the gravy mix.  The easy kind of gravy you get from a packet.  One cup of water per packet. Nothing fancy in the hinter regions today, leastwise when a brooding storm gathers in the distance. Why must it always happen at supper time. Anyways, in short order, it all came together well enough. The sausage, the biscuits, and the gravy. And here is the trick to save on washing some dishes. Forego the plates and forks altogether, and instead, split a biscuit, lay some Italian sausage in there, and spoon in a couple globs of savory gravy, just because. A sandwich fit for a hobo. Or a king. 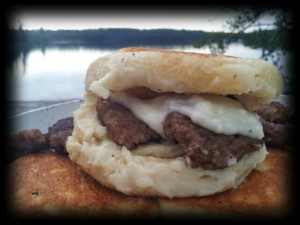 Glory be, but they were tasty! We gobbled them all down, like hungry lions to a fallen wildebeest.  Each sandwich inhaled progressively swifter, as the rain drops began tapping like Beethoven over the land and the lake.  A hot-white lightning bolt suddenly splits the sky in two, and the rain increased, dousing our cooking fire, mercifully after the deed was done. We dash for cover of the tent, tucked into the forest hollow. And the tempest commences. But we are content. Well, as content as two fellows caught in severe weather in a little tent in the middle of the woods can be I guess.  For our bellies are at least full, having done that which we fiercely love. And if we were going to perish by lightening bolt today, we figured,  at least we would be well fed.

The storm eventually passed, like all storms do. We emerged from our little tent like two, unassuming ground hogs to assess our world. And it was beautiful. Washed clean, and renewed. The lake was like glass again, with a deep reflection of its wild shores. Rain drops tenderly cling from fragrant pine needles, and the loons serenade again, from across the bay. I wanted to mutter something profound, but that would only spoil the tranquility. 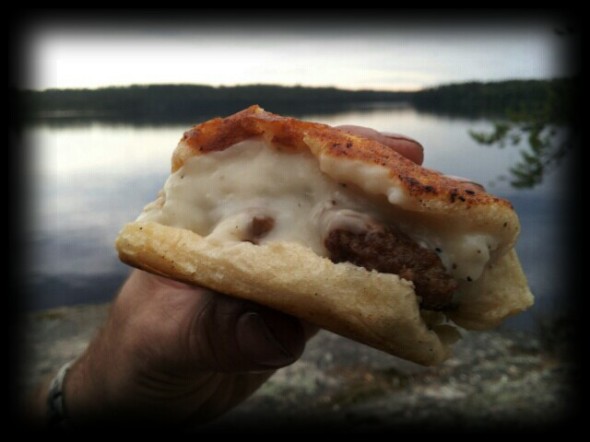 Biscuits and Gravy Sandwiches, made over the open fire, under wild skies, patron to paradise. Man! The simple life, people. And how I long to be there once again. Amen.