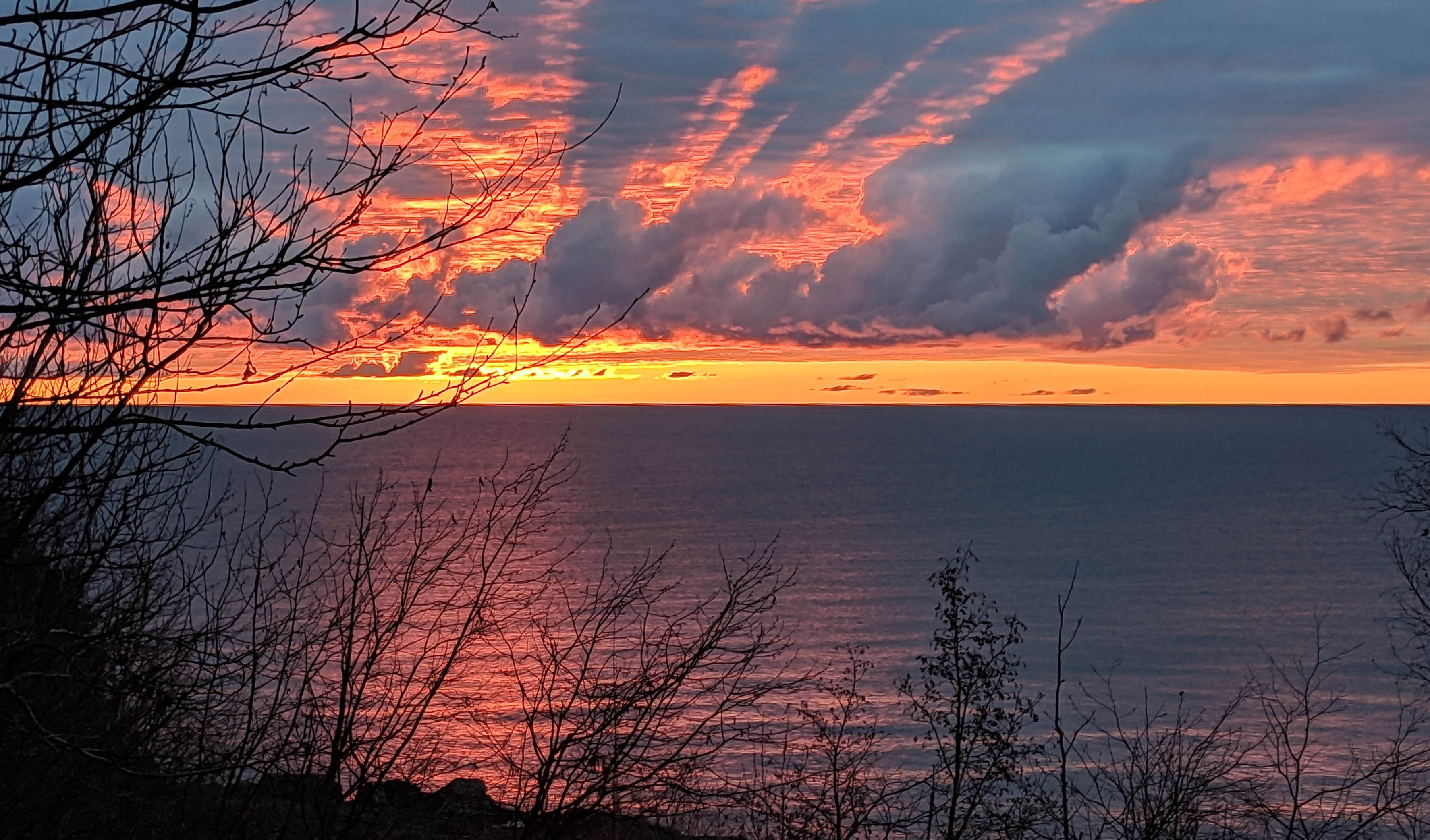 The Black Capped chickadees cavorted outside the tent in the gray, morning light, whilst shafts of cherry and gold began to burst over an endless sea. I looked over at my fellow patron, who was already mentally booted up and gazing out the tent flap at a sunrise fair to tally the ages. We were encamped on the wild shores of Lake Superior, in Minnesota’s famed arrowhead country. The big lake was alive, and pulsing with ice water waves that which rolled against the rugged coastline. We love it up here. It’s what we do.  We’ve come not just escape the maddening urban throngs of the city, but more, to embrace the wild side of this planet, on it’s own varied and distinct terms. To live simply. To breathe purely. To sup from the fountain of youth. And if we’re lucky, maybe even cook something tasty here, where the earth meets the sky. And the steaks have no name.

Tradition Has No Name

It was a year ago about this time that we made steak sandwiches on our annual November romp in the prettier places. You can read about that write up here, if you’re into such things. The sandwich was so good, and so delightful on the palate, we sought to recreate it again this year. But this time we would up our game slightly with the always covetous and tender chew of No Name Steaks. Now I don’t know if you have ever had occasion to plate up No Name Steaks before, but to those who have, you know from what we speak when we say them things is tender.  Like you almost don’t need a knife to cut it, kind of tender. The kind of steaks that give false-toothed grandpas a real kind of hope! We’ve grilled them now and again over the years, and we have concluded that you would have to be a rank folly pit keeper to screw up one of these endearing steaks.  I don’t know what they do, or how they do it, or why they have no name,  but meat wizardry is clearly at hand with these cuts. I suppose also one ought not to dawdle on these things either, but instead to say thank you to the kindly meat folk at No Name Steaks, for producing such lovely and slobber-tugging Hunks O’Tenderness. Our bellies are forever indebted to your mastery of the meats.

Anyways, lets get after it.

Business was done in style this time,  with our highly esteemed and beloved,  Mojoe Griddle. We’re talking restaurant grade, people – 35 pounds of one-quarter inch, hot-rolled steel (insert grunts here), the thing will keep cooking after three apocalypses we reckon, and deflect bullets too if tipped up on end. Always a pleasure to cook on the Mojoe. True, our gas mileage was reduced by 5% hauling this thing up north, but lo, who cares. You can set it on a Weber kettle, or over the fire pit, or like we did this time, on the Camp Chef Stove. When cooking en-mass for a fair number of hungry and hardy outdoors people, not too many other griddles are as finely suited than this. 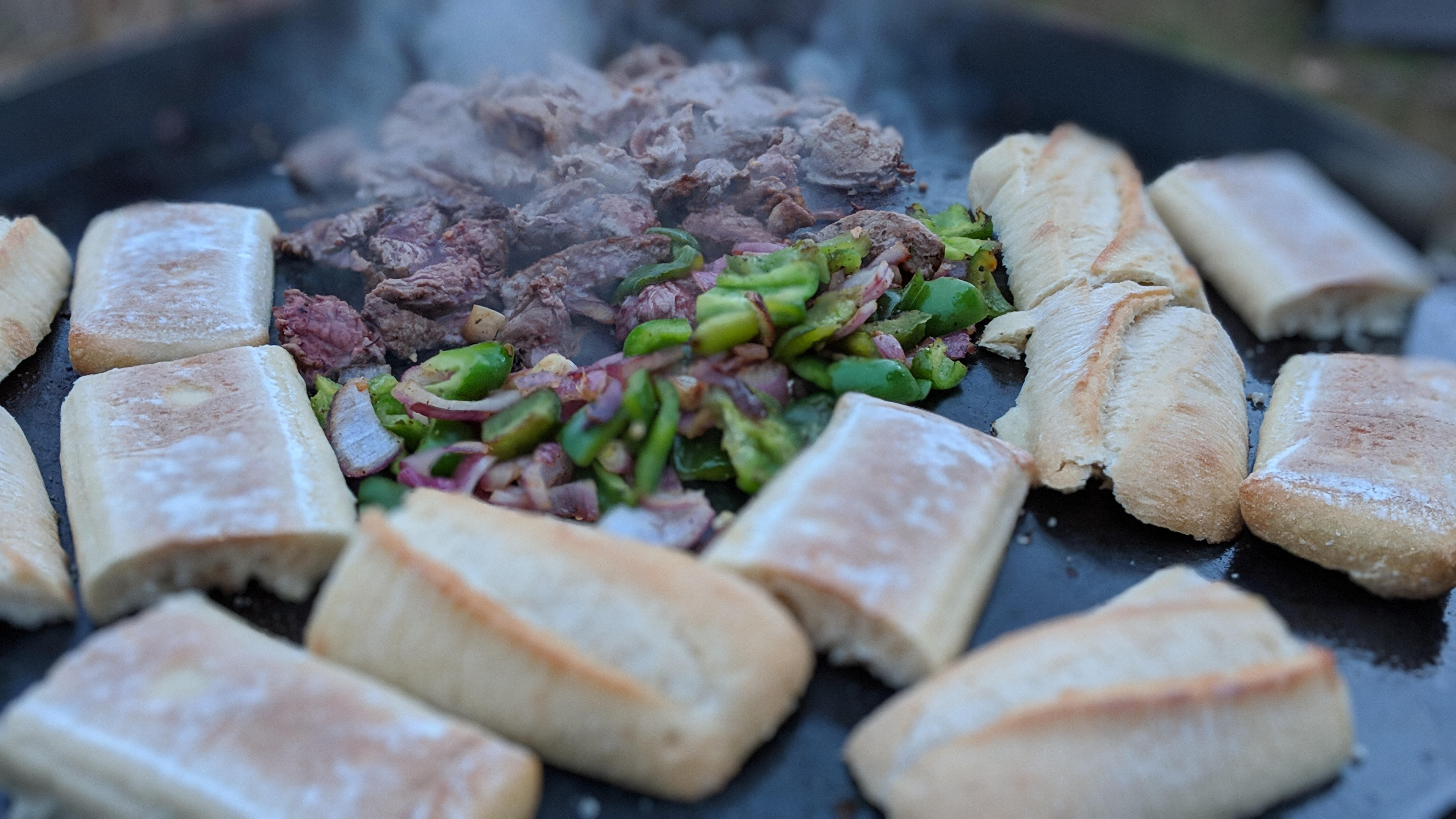 Thus it was merely a matter of slicing up the steaks into bite sized strips, along with some red onions and green bell peppers. Saute all this together over a very hot griddle, lightly coated in oil. The less oil the better the char. The Mojoe doesn’t need much oil either, as it’s near friction-less surface is akin to that of an air hockey table. Griddle up your steak chunks to a nice medium or how ever you like it, salt and pepper to taste, and bring the peppers and onions to an agreeable tenderness as well. We even tossed on some thinly sliced roast beef that we happened to have in the cooler. Why not! Be creative. This is really elementary cooking folks. Anyone can do it. We toasted the lightly buttered  baguettes in one accord, and assembled the sandwiches with a fist full of shredded cheddar cheese, and some Mount Olive deli relish. Sided with a scoop of camp chili. Mercy!

Dinner was held by the romantic glow of the kerosene lamp, and was a pleasure all unto its own, serenaded by the pounding surf of Lake Superior, and the camaraderie of good friends and fine food. You could have offered us a table at the world’s finest 5 star restaurant then, but we would have turned you down, I think. For as our tummies tightened around these cheese steak sandwiches, and the stars turned above, we were at once and unitedly content there. At ease in our little corner of the world. We had come to live deliberately, as Thoreau once said.  Where the earth kissed the sky. And we did that. And for a moment at least, and maybe even longer than that, weren’t we the kings. Amen.

A special thanks to the good folks at No Name Steaks for sponsoring our dinner tonight. They are a local Minnesota company based not too far from where we live. They’ve been putting out tasty steaks for years and years, and I can hardly wait to grill up the next one. Please check them out at No Name Steaks and get your pit master a box for Christmas or something!

Also, if you want to learn more about the Mojoe Griddle, here is their site for you too.

Something From Nothing: The Art and Privilege of Camp Cooking 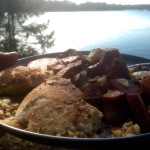 It may be noted, at least from time to time, that we do like to get away from it all here at this blog. To pack up a modicum of supplies, and strike

off for the distant bush lands of Minnesota’s northern most tier. A locale rich in quietude, and resplendent in its sky-tinted waters and vast elbow room for the soul. Canoe country. A million acre outdoor theater where the lonesome wail of the Loon echoes with impunity through the forest primeval. Where the whispering breezes murmur sweetly amid the lofty, Norway Pines; those magnificent wooden spires that which thrust high into a wild, blue sky. Canoe country. Where the slap of a beaver tail on still waters is heard over a quarter-mile span. Where a nap in the hammock whilst the pine-scented breeze whistles through your toe pits is at last your loftiest ambition for the day. Well you can see why we like it up here. And why it is we very occasionally aspire to get away from it all.

Feeding one’s belly is one of our favorite activities whence in the hither lands. And how you go about it, and what you get out of it is solely up to you. Somethings spoil fast with out the advantages of refrigeration, and those things you probably ought to ingest the first day out, or not bother to bring along at all. Chocolate, for example, melts like a cheap nuclear reactor, and bread flattens finer than an Iowan interstate. After a few trips afield, you learn rather well what works and what doesn’t. 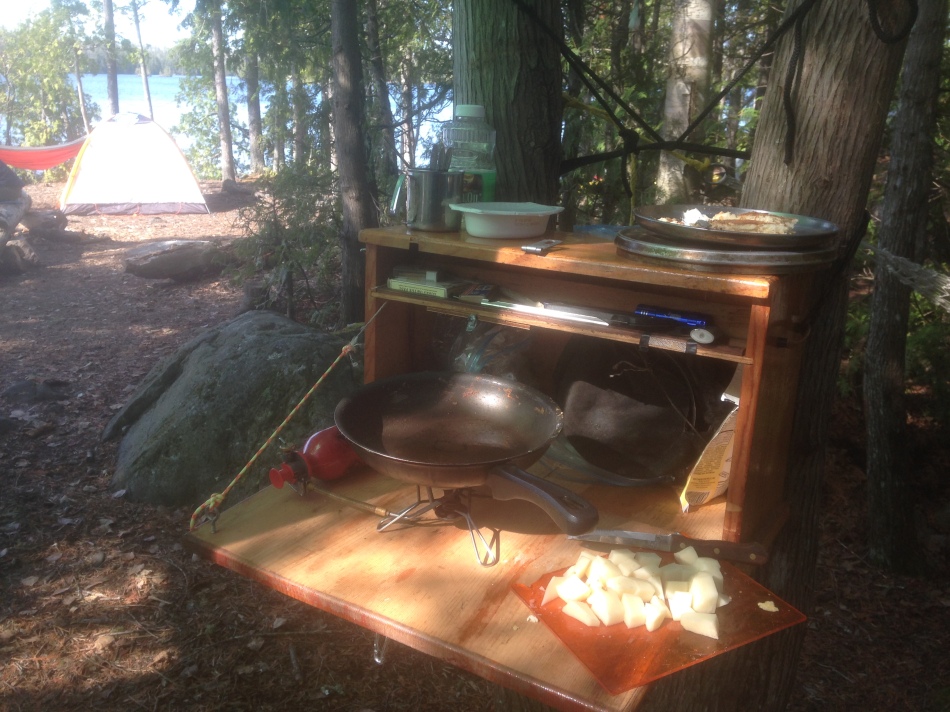 In between naps in the hammock, we partook in a little culinary tinkering courtesy of the Joy for Cooking – the namesake of a little back woods chuck box spawned from many a camping trip spent on my haunches, cooking on the ground. There comes a time in Bushman’s career where the notion of a kitchen counter top is a highly appealing affair, and one worth pursuing if not for any other reason than because he can. So I did. You do not realize how good you have it at home until first you go with out.  So I came up with this little creation years ago, for to better and more effectively cultivate my joy for cooking whilst encamped in wilder places. It has been a treat indeed.

Camp cooking is always an interesting summit to scale. It’s like a back pack, in that you only get out of it what you put into it. So if you didn’t bring a certain ingredient, then you don’t have it. And there is no running to the grocer either, this side of paradise. Well you could, I suppose, but by the time you get back it would be the next day, and your dinner aspirations would fall way of the dodo bird. So you work with what you’ve got. And usually that ain’t much. But in the same breath, that’s what makes camp cooking kind of fun; getting the most you can from a scant simple grub bag. Here we did up a plate of buttermilk biscuits/bannock, fried potatoes and onion, and a nice ration of sautéed summer sausage to round out the proteins. A hodge-podge conglomerate, if you will, of the better things I could rummage up from the recesses of the food bag. And let me tell you, after paddling the day long, with an appetite stoked from the freshened air, living a simple but deliberate life, this was a plate fit for a king. Under the circumstances even, I couldn’t think of any place better to eat. Nope, I had arrived. As any realtor knows, it’s all about location.

What a pleasure it is to round off a weekend in the wilderness, with a belly well fed. To lean against an old Cedar tree, hot cup of tea in hand, left leg crossed over right, and gander westward over still waters to a setting sun. To hear the loons softly sing through a land so silent, and to smell the air sweetly tinted in pine. It’s been said that time spent camping is not deducted from your lifespan. Well, I don’t know know if it’s true or not, but even so,  it would explain why we so often go afield, and why even now, at this cluttered desk back in the city, why mine heart hastens to be back there once again. Amen.