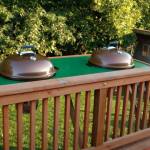 Some people are just more clever than others.  Terry Dabb, of Aurora Wisconsin, is one of them. When I came across this photo on the Weber Kettle Fans Facebook page, I thunk to myself, now why didn’t I think of that! Well, I don’t have a deck for starters, so in that respect, I do take some console in my lack of deck creativity. But a lot of people do have decks. Tiny, little decks. And a lot of those people still wonder how to fit their Weber kettle grills on them in a proper like manner. It’s a quandary that has haunted many a pit jockey down through the ages. Terry Dabb, however, has finally developed a rather elegant solution. 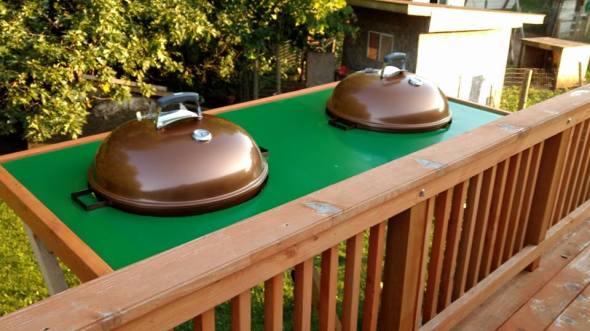 “What you don’t see in the pics is I have 4 more Weber’s” Terry says.  “When looking for something to mount them on a free steel door came available from a customer of mine. And the idea ran from there.” 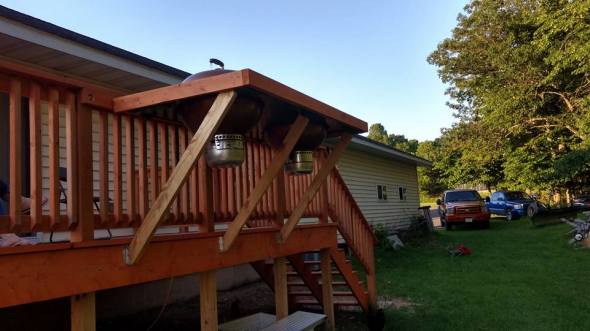 “I have limited space on my deck”, Terry said, “So I just started Brain storming. On how to try and manage my limited space.”

I’d say you brain stormed pretty good my friend. As one of our readers on our Patrons of the Pit Facebook page so eloquently put it,  “I bow to the King of Sensible Deck Remodels”. Indeed, a lovely tribute to backyard ingenuity and the endearing will of an inspired pit master.

Terry, even tho you’re a packer fan, I do believe we would get along just fine. This one’s for you!