Review: Breakfast With The Mojoe Griddle

I have a superpower. I’m probably not supposed to disclose this, but it’s true. Kind of like you see in the superhero movies that are popular these days, though milder I suppose, but yeah, I’ve got one of those sorts of powers. Some dudes can levitate metal objects. Others can read and manipulate minds. While still others can run faster than a speeding bullet. Well, I can’t do any of those things, but what I can do, and astoundingly well I might add, is break stuff. I can take your perfectly functioning automobile, for example, drive it once around the block, and return hither with the muffler dragging, wipers that won’t shut off, one head light out, and furthermore, get out of the car and hand you the blinker lever too. And most days, I can do this without even trying. My elder brother sometimes refers to me as “Lo-Tech”, which sadly, and off-hand, would be my super hero name. Iron Man wouldn’t stand a chance against me, as all I would have to do is lay hands on his suit of many gizmos, and, well…That’s my superpower. I break stuff.

Thus it was with a raised eyebrow, when, Cam, from http://www.mojoegriddle.com, hooked me up with one of his steel griddles specifically designed for a variety of heat sources, and stated that henceforth, this thing could not be broken no how. Clearly he doesn’t know my powers, or he wouldn’t have bellowed such folly. For many things have come and gone out of my life, claiming to be unbreakable. And most of those things reside now at the bottom of a dump heap somewhere, a sad shadow of their gloried past. But this here griddle looks to have a different fate. And I knew this as soon as I heaved it from the box.

Nearly 24 inches in diameter. 1/4 inch thick hot rolled steel. Weighing in at 35 pounds of pure cooking satisfaction, I tell you this griddle meant business the very moment I muckled onto it. We have never seen another griddle on the market so well endowed. It’s quality and it’s craftsmanship are top-notch. It’s cooking area, in a word, sprawling. They are also made in California, I learned, which in our opinion, makes it all the more better. But enough talk, let’s get to testing this beast out, shall we!

The Mojoe comes with a very nice set of steel handles that grapple onto the griddle with ape-like ease. They seem well made, not that you will be moving the griddle very much once in place over your heat source, but when you do, the Mojoe is one hot & heavy entity, and bless it’s maker for including a couple of good handles with it. Now lets take a gander at the underside.

It’s simple looking under here too, however, there is more going on than meets the eye. Note the obvious – the three steel bars welded on edge. This is what holds the griddle off the top rim of your kettle grill, by about an inch, and furthermore promotes air flow for the fire below. And it works, people. It works exceedingly well. These bars also enable you to place the Mojoe on a variety of heat sources, like propane burners. These same bars also help re-enforce the griddle from warping due from extreme heat traumas patron to the pit. And the 5/8th inch nuts you see welded under here, well they’re for the galvanized steel legs to screw into, for say, if you wanted to cook over a campfire and such. Love it! Simplicity is always the best design, and this whole Mojoe experience is an example why.

With a deft fire catered in coals, we placed the griddle over the fiery bosom of the old kettle grill. The two merged together like old friends. Like they’ve been doing it all along. And it didn’t take long for the Mojoe airflow system to kick in, cranking up that fire good and hot. *Splash a little water onto the griddle, and if it dances about in a sizzle, it’s hot and ready to rock.

Of the first order, they say, is to season this puppy. And it’s real easy to do too. On a hot griddle, sprinkle it over with some table salt, and splash it with a little cooking oil. Lastly smear the works about the entirety of the griddle surface. The salt acts as a food grade abrasive, and make sure you wad up a good bee hive worth of paper towels in your hand before engaging in this activity. We were done with this process in about 30 seconds. They say to do it again after your meal is done. Kind of like book ends to your cooking. My pleasure. It kind of engendered the same, satisfied, feeling you get when you wipe down your favorite sports car after a Sunday drive. Leastwise I think that’s what that feeling was. I dunno. I don’t have a sports car. Anyways, how about some breakfast!

Have you ever been on those sorts of kicks where you just want breakfast food all the time?  Well

that’s been the case for things around the pit lately. And the Mojoe Griddle certainly supports such gastronomic whimsy in the human spirit. I didn’t fight it either. So we diced up two large potatoes to uniform size, and tossed them on the freshly oiled griddle. They sizzled henceforth to life, as we in turn, dusted them over with some all-purpose seasoning. With a lovely beverage in hand, we escorted the spuds about with our steel spatula as per the promptings of our pit master instincts. Very pleasant. Reminiscent of cooking on one of them fancy griddle tops you see in restaurants and cafes.  Very much like the one you see at the Mongolian stir fry places. After a time, we added in some chopped onions and bacon to the ensemble. Man, the aromas bellowing about the patio could have tipped the nose of any black bear within a twenty and one mile radius. And I suppose it would have, iffin there were any black bears in the suburbs of Minneapolis. But there weren’t. And I still don’t have a sports car.

Now I was told that the surface of the griddle was nearly non stick, and I’d say that by and far, this was an accurate statement. The more you use it, and season it, the better it gets. The first cook here hardly anything stuck, and if it did, it wasn’t bad. The onions, in point of fact, slid about a little too happy-go-lucky, like you were engaged in a game of competitive air hockey or something. I even lost a few morsels over the edge, and if it weren’t for the griddle lip accessory, I probably would have lost a few more to the tall grass residing below. 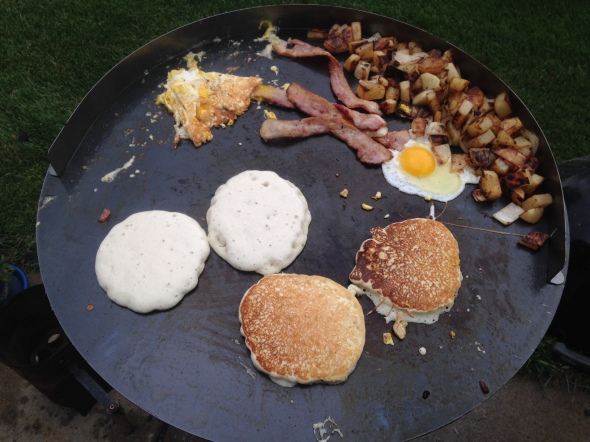 The griddle lip, or metal strap, arcing around the back of the griddle, proved to be quite useful for us sloppy backyard chef types. You can take it on or off, by popping it into the same holes used for the handles. The lip was a real potato saver for this patron of the pit, and in general, a very good idea we thought. When the spuds were done, we banked them accordingly against it, to keep them warm there, and to open up room for the rest of our breakfast feast. Man! I love breakfast! Can you smell it yet!

Here is one of the other simple pleasures of the Mojoe Griddle – no edge lip or grease trough. Thus allowing one to sweep his spoils directly onto his dinner plate with aplomb. No edge around the griddle also makes clean up poignantly swift! As Cam from Mojoe Outfiitters coined, “Clean up is a snap!”. I like his thinking!

There is something therapeutically right which impresses upon the emulsion of your soul, when you cook out-of-doors. Sure we could do this sort of thing inside, whilst the TV flickers in the background, under artificial lights, and processed air, but why. For what blue skies yonder do we miss then, and the bird song too, and the sweet summer breeze which flutters the green leaves just past our outdoor kitchen. And the sun, how it sweeps in a golden trail across a beautiful blue sky, and the cloud shadows which drift silent over the land and the sea. This is why we cook outside. The food is only half the reason.

A beautiful product. We really enjoyed our maiden cook on it. It’s almost, but not quite, non stick. It sports vast acreage of cooking space. At 35 pounds, it is a bit heavy for ye types of scant muscle mass, but we reckon you’ll be able to manage. If you can lift a chubby toddler you can lift this griddle just as well. The craftsmanship is excellent. The handles are very nice. The legs were simple, but effective. We also liked that you can cook a lot of food at once on it, which makes it worthy for back yard parties, group camping, or even tailgating. Or maybe you just like to eat! The griddle lip accessory is wonderful too. If you get one of these griddles, you’ll probably want to pick up a griddle lip. We liked the option of being able to pop it on and off at our discretion. The only hit against this griddle we could find really was the price point. $264 is enough to make most wallets groan a little, but at least you only have to buy one of these. Ever. It’s not like we are going to out live the thing. Shoot, these griddles will probably still be around after the third world war has re-arranged the posture of the planet.  High grade steel is like that. Over all, though, a rock-solid, versatile, large, nearly stick free, enjoyable cooking surface built to last the ages. Your grandchildren’s grandchildren will inherent this griddle.  And in this disposable society in which we tarry, say what you will, but that’s money well spent. And yes,  try as I may, my superpower was all but ineffective against the Mojoe. Indeed, I couldn’t break this thing, no how. And I like that. I like that very much.

WHERE TO LEARN MORE

When you get a chance, go check out http://www.mojoeoutfitters.com. Cam Stone, the man in charge over there, we found to be a kindly, salt-of-the-earth, engaging chap, with a sense of humor as durable as his griddle. A griddle 8 years in the making he said. Much tinkering in overland campsites, cooking for his trail mates. He said he got disgruntled with his little frying pan trying to cook for 4 to 5 people, that eventually he found himself a surplus steel disc, propped it up over the camp fire, and was “blown away” by the performance. He was able to cook for 5 people in about 20 minutes. Thus the Mojoe Griddle was conceived. And the world is just a little better place now, because of it. Go check it out if you please!