Posts tagged “having a baby” 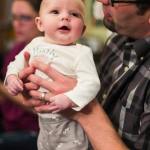 A long time ago on a backyard patio not too far away….

It was a time of year when the heat was beating on our Pits with such strength. For one Patron was going about his summer enjoying the freedoms of his yard and his pit, when completely unexpected, he was taken back by a phone call that would change his life forever. He and his wife were asked to adopt a baby girl who hadn’t been born yet. Fast forward 4 days later, little Isabella Mae was born at 8 lbs 11 oz – about the same size as a prized brisket. Being he and his wife only had 3 days to prepare for their new blessing, their world was turn upside down.

Three months later this Patron was starting to feel very comfortable with the lifestyle of a new Daddy, as he noticed he hadn’t touched his pit once in those three months. Sharing his revelation with his wife she dared to ask a very conniving question,

“Are you sure you still know how to smoke anything?”

Insulted, yet with a cocky posture he looked at her and said,

“Honey, I am a Patron of the Pit! Smoking is in my blood. I sweat hickory! I enjoy the burn in my eyes as the hood of my pit opens and the sweet aromas of fire, wood, spice rubs and barbecue sauces bellow towards my face. There are not many of us who stand out at their pit during a Minnesota blizzard while the rest of the world curls up on their couch waiting for a microwaved dinner. I will not let three months of not lighting my pit filter this Patron’s good name!”

So with his chest out and his head high, he accepted her challenge unveiled.

With eagerness he took his challenge fervently. He stalked the aisle of the meat market looking for the cut of meat that he was going to shock the family with. And there it was, a 4 pound pork butt! He went in for the kill…even though the choice meat was dead, he paid for it and took it home like any backwoods hunter would, returning to his family with trophy in hand.

That Saturday night he mixed his marinade:

He let the pork marinate for 12 hours in the refrigerator and the next morning the coals were lit at 10 am.

It was a nice day out at his pit. A south wind was blowing at a medium pace and the sun was hitting the cooker just right. Though it was

only 15 degree’s out, he enjoyed the cold air mixed with his choice of wood for the perfect smoke. He decided to hit the pork butt with the sweet flavor of cherry wood, offering up a light smoke to taunt his neighbors with. The smoker was a steady 250 degrees as he monitored the temperature and stoked his fire-box as needed. A good 5 hour smoke went by and around 4 pm he took the pork butt off the cooker, wrapped it tightly in tin foil and let it rest for 45 minutes. Once it was done, he slowly peeled back the foil. The pork immediately fell into pieces, thus started the pulling process. With two forks he did just that. He added his favorite smokehouse maple spice rub and mixed it all back in with the juices that collected from the initial smoke.

Later that evening with a full belly, his wife turned to him and at last recognized his craft. She reassured him that he hadn’t lost his skill and stated that she wished for him to continue plying his art of the smoker. And so he sat, knowing that a successful pork butt wasn’t the real prize here. The real prize was sipping from a bottle in his arms. He smiled contentedly…