The Long and Short of It: Updates From the Pit

The days they taper slowly now, pulled by an ebbing sun. The tweety birds have all had their babies. And the green pepper plants are knee-high to a pit jockey’s eye. The cottonwood trees, pond-side, have completed their annual farting of the white fluffy things, which scatter in the summer breeze. The Lilacs have come and gone already, but my they were grand. And just like that, it’s summer time at the pit, and it’s glorious. And in some ways I thought it would never get here. Let’s digress…

Hearken back with me, won’t you, to just last April. Here is what it looked like then. This photo below tells the story so well that it made the face book page of our local news station. 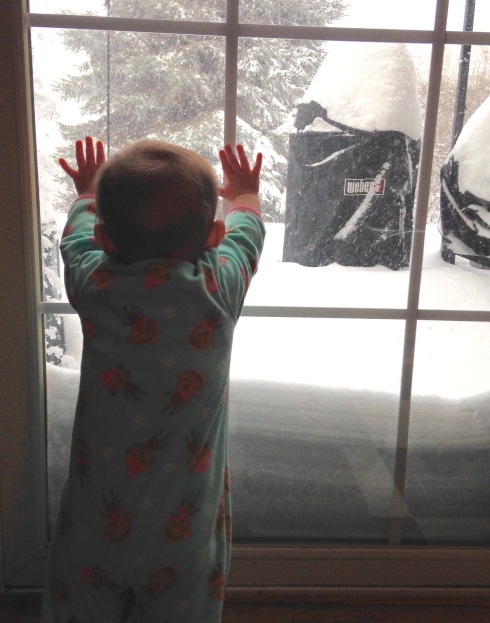 April blizzards were the norm. Wintry tempests that would not cease. The wee one fancied a good window pane then, as you can see, observing the powerful winter storms beyond. They swirled endlessly it seemed, the hopes of summer BBQ but a whisper in the wind.

One day in May, I think, or was it June, the snow eventually petered away, and ground thawed and mud puddles and rain filled the days. The dirt smelled good and so we planted things there. They eventually took off like things do. And I suppose also that’s when the baby figured out how to crawl. 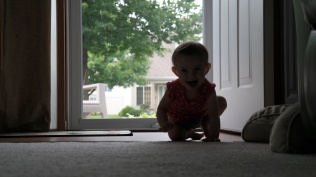 It was like a teenage kid learning to drive a manual transmission, stuttering in first gear in the parking lot at Sears. Eager and unashamed at the face of this daunting task, eventually she learned how to get the crawling mechanism going. Well sort of. She looked akin to a wounded puppy, sort of dragging herself along. But it worked. And she got to where she wanted to go. Which is good, I guess, it’s just that the only place she really wanted to go was straight to the fireplace.

Thus began the Chase Era. Every parent knows it. The span of months, maybe years, where you have to run down your little one and pluck them from danger at the last minute. And that’s the era we’re still in now. Maybe it never ends. Ever the perpetual eye must be kept on the little one, for the world is brand new to her, and exciting, and everything is worth investigating she thinks. And here at the beginning of July, today in fact, she is turning 1 years old already. How about that!

*On an aside, we here at PotP HQ would like to thank those of you in the readership who have faithfully stood by, or inquired where we’ve been and how we are doing. It’s been a while, I know. But we are doing amazing. As my Grandpa in-law is fond of saying, “We are blessed and highly favored!”  And it’s true. Never has a rough pit master’s heart melted like this, people, nor his soul felt so satisfied. And as we start to find our new rhythms with baby, we hope to get more grilling posts out to you soon. Thank you kindly for your patience, and on going support.

As I grilled supper the other night, turning the protein over a beautiful bed of coals, breeze drifting quietly east to west, I thought back through the last year of raising a pup. I need not go into detail of the joys and the trials of such things. You all know that stuff already. But I am rather fond of one line of advice several people have told me over this last year, concerning babies. I think about it often. Perhaps you’ve heard it too.

That old saying that goes,” The days are long, but the years are short”.

How can something be so long and so short at the same time? I don’t know. But have yourself a baby and you will at least experience it first hand. I cannot for all the pork chops in Thailand figure how it has been a year already since birthing the wee one. Seems to me it was just a few weeks ago that we brought her home. Yet, in the same breath, it’s felt like this last year has taken a generation to unfold. And I suppose before you know it, she’ll be driving that stick shift and bringing home boys I do not like. These are the heady anomalies in the human condition I suspect we may never figure out. But a good reminder, however, to pay keen attention to the days we are in, and to whom we are with. For the days they may seem to taper slowly, but the years will be gone tomorrow. Like mesquite smoke snatched by the autumn wind. Amen.