How To Win Over A Man: Steak!

We are men. And we are moved by meat. Don’t ask us why. We don’t know. Difficult perhaps to articulate, but easy to appreciate, whence our incisors have pierced the hallowed surface of that perfectly seared steak. Ah yes, steak. A good one will settle a restless man’s soul,  and in turn draw him closer to thee, and unto his meatiest ideal. Hark, the world and it’s cares fairly ebb to a faint hush, and the pendulum of the sun at once holds stalwart in the sky, when at last we lay big meat to flame, and simply cook it there amid the rising smoke. Oh how we favor a good steak, abiding in it’s juices, sizzling quietly over a beautiful bed of coals. It moves us. 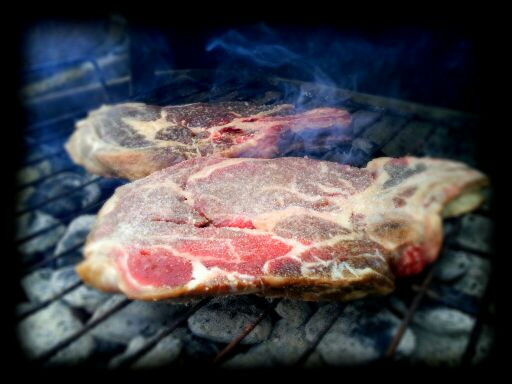 It was one of those vintage winter afternoons, under skies of sleet and falling snow, where the call of the grill was at it’s most primal. It’s most basic, I should wager. Nothing fancy today, as fancy would only ruin it. Nay, when bridled in the heady thralls of meat lust, let there just be meat on flame, and let hunger be our spice. The rest will sort itself out, by and by. For today, as in days past, we are smitten for the rib eye. The bone-in succulent sort known to send grown men into slobbering fits of idiocy. Plunk one of these down on a man’s plate, and plop a potato along side it, and he is at once and for all the world, a contented species. Gobbling quietly by himself, with no apparent no need for conversation. Like a pacifier to a new born, for a time anyways,  he will require little else. Indeed, for a few fleeting minutes, and maybe even more than that, all the world is right. For let it be said, nothing is quite so efficient at setting a man straight, than grilled meat on the bone,  and a fashionable side of potatoes. 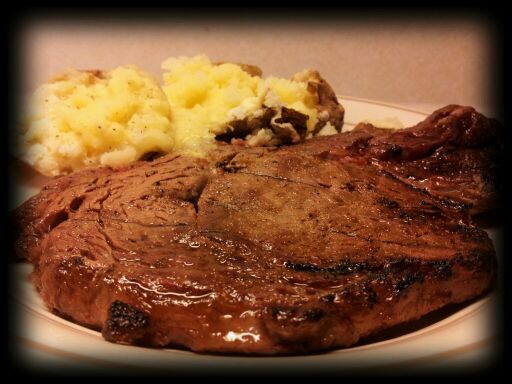 So next time your looking for something simple off the grill, or have a restless man on your hands, well, ain’t too many things better suited for both, than a perfectly grilled Rib Eye, and the space in time to devour it.

Have you ever happened upon a piece of meat that should come with it’s own cardiac unit! A mass of flesh so prominent that folks are slowed by it’s gravitational field. That cameras are drawn, and grown men weep with happiness. Meat so big that it’s effects ripple into the stock market, and Wall Street, and pronounced plunger sales. Such a hunk of meatiness was spotted in the Minneapolis area over Christmas. Photos were snapped. Respects were paid. And then of course, after a moment of silence,  it was eaten. Amen. 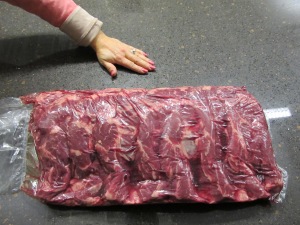