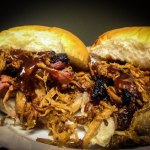 It was a morning of slow-curling pillars of pecan smoke which tapered and twirled in the golden shafts of a rising sun. The tweety birds also were in full symphony, flirting in the naked dogwoods at the pond’s edge. And the breeze which sifted through the patio furniture was cool, but soft to the touch, with a tint of mildness lingering in the eddies; a heady sensation not privy to these parts in many moons. And the winter’s snow bounties are receding now, like an old man’s hairline. And there is grass. It’s not the best grass, but alas it’s grass no how, and say what you will, but in February in Minnesota, that is no small thing. I delight also in the way the snow courts the spruce trees yonder. Filling in between the needles. The contrast of green with pockets of white. It’s just a lovely time of year. A first hint of longer days.

On the pit this morning, awash in the early morning light, we have what might appear to be two handsome pork butts. But in point of fact, they are only one. One petite butt, actually, sliced in half. And the reasoning for this is something we’ve been experimenting with here at PotP Headquarters for some time.

You see, I’ve had to eat a few sandwiches for you people to figure this out, but alas, it’s a price for knowledge that I am willing to pay. I’m good with it.  But it turns out you do not need to smoke a pork butt for 12 hours to accomplish effective BBQ. That is, I suppose,  if you don’t want to. Because there are plenty of days I would just as soon take the scenic route like that, if for no other reason than I rather fancy the journey. But there is a secret bypass on the road to succulence. A route in detour slightly swifter, but just as edible. One that flirtatiously courts the ever-ebbing passage of time with the affable affinity and gentle premise of the tooth fairy. Lets go there, shall we. Lets do this!

The Power of Halves

By slicing your pork butt in half, what you have done, we figure, is reduced the cooking time by maybe a third. My calculations are crude, I admit, but it’s something like that. Smaller butts cook faster than bigger ones. It just stands to reason. What you have also done is increase the surface area. This opens up more acreage for more spice rub and further, more smoke penetration. And what all that means is, you’ll get more bark.And every pit jockey fancies more bark. All of this just from slicing your butt in half. So we sliced it.

The night before, in a zippered plastic bag, we marinated the pork in Kits KC BBQ Rub, from our friends over at Miners Mix. Meat and spice. It’s like hooking two lovely souls up on a highly engineered blind date. It just can’t help but to go swimmingly. We just let the flavors mingle the night long, and let nature take its course. To “get happy“, as they say, in the romantic, yet estranged confines of the refrigerator. And by golly, they did!

Or if you want to whip something up yourself, here is a basic rub recipe pretty amazing on pork.

In the morning the meat was ready, already smelling amazing, and was plopped accordingly on the old kettle grill. Now, I would usually use the Weber Smokey Mountain for pulled pork, but again, I was in the experimenting mood. There isn’t much, after all, you can’t accomplish with a good kettle grill. The smoker is designed to hold a lower temperature, but you can do it on the Weber too. The trick with the kettle grill, at least the 18.5 that I used, is to build a smaller fire than usual. We’re talking just ten to fifteen briquettes, if that. Maybe a few unlit briquettes to sport a little Minion Method if desired. All this to keep the temperatures low, say around 250 degrees.

We tossed on a couple chunks of pecan wood, mostly because it’s the only wood we have in stock right now. Just so happens tho, pecan wood seems to go well with any meat you might wish to smoke. A fine all-around smoke wood. Anyways, we plunked on the old enameled lid, and went about our business. Namely that of tucking a periodical under the arm and sauntering into the little pit boy’s room for a spell. You know how it goes.

On an aside, we often get asked about our cast iron grates. They are from a company called Craycort, and might very well be the nicest thing you ever do for your Weber. Check them out on our Amazon affiliate link below. It helps keep a good company in business, gives us a wee kickback, and pretty much pimps out your kettle grill to the highest order. Sincerely, they are great grates!

*Rotate the butts 180 degrees every now and then for even cooking. 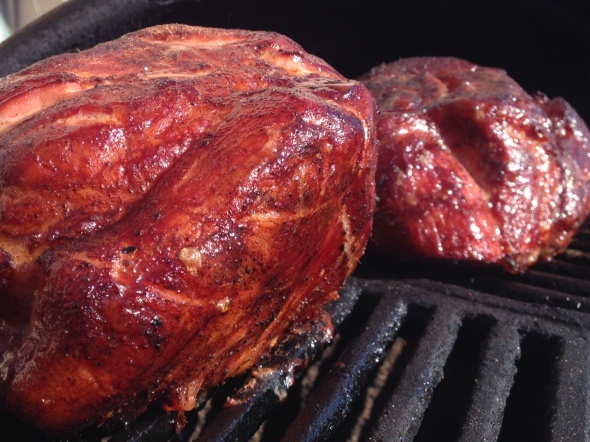 After the coals had nearly gone out, we checked under the lid and I noted I had gotten the color I was after. And that’s good enough. You don’t even need to take it’s temperature. That’s how easy this pulled pork is.  And that’s all the further time the butt needs to spend on the pit. The next step is to plate them up temporarily, and ferry them inside and put them into…I can’t believe I’m saying this…but yes, put them into a….crock pot.

Now I know what you’re thinking. What would a patron of the pit be doing with a crock pot! Well, to answer that, I know what else you’re thinking. You’re thinking crock pots are awesome! Brilliant pieces of culinary technology worthy of enshrinement in various halls of fame and grandmotherly kitchens. Why wouldn’t a patron use one! And I agree. But let’s digress, shall we, to the day you were born.

You see, those first couple of hours on the pit are not unlike a baby’s first two hours out of the womb. It is the golden period of maternal bonding and modern meat smoking alike. Not only are the first two hours after birth where a mother bonds intensely with her spore, but  likewise, it is also where a man imprints with his meat! Okay, I got carried away there. What I’m really try to say is, your meat gets all the smoke it needs after the first two hours. In point of fact, I’ve read from multiple sources that a smoke ring is done forming around 140 degrees internal temp. Or about two hours. It just works that way. Any smoke after that point, technically, is wasted in kind. You can read more about such things, here, if you’re interested.

So the pork has all the smoke it needs after two hours on the pit. That’s the thing to remember here.  It’s not done cooking. It has just received the high blessings of the pit, is all. It has been anointed in smoke. We then transferred it to the crock pot, with a few squirts of BBQ sauce, where upon and with the aid of modern crock pot wizardry, you simply leave it to it’s own devices. Bequeath it to the BBQ fates to fall apart as it will. And it will indeed at around 195 – 200 internal. And you do not need to take its temperature here either. Pulled pork in a crock pot is easy like that. Just let the meat speak to you. Use your pit master instincts. It will tell you when its done by its tender flanks submitting to the masterful glide of your fork, as succulent pieces of butt topple over itself into whetted pools of its own glorious juices. The crock pot really does take the guess work out of it. The babysitting. And when its done, it will even keep itself warm until supper. Golly! What utter decadence! It is like a Boeing 747 landing its self on autopilot, and the pit jockey need not raise a finger. And in the end, after you pull it into savory shreds, and stuff it into a good roll, you’ll  have yourself some authentic, smoke house quality, BBQ pulled pork, succulent enough for the kings,  fit for the pit master, and the crown jewel of your crock potting career. And it was easy too. Real easy, patron to the pit.  Amen.

This site is a participant in the Amazon Services LLC Associates Program, an affiliate advertising program designed to provide a means for sites to earn advertising fees by advertising and linking to Amazon.com.